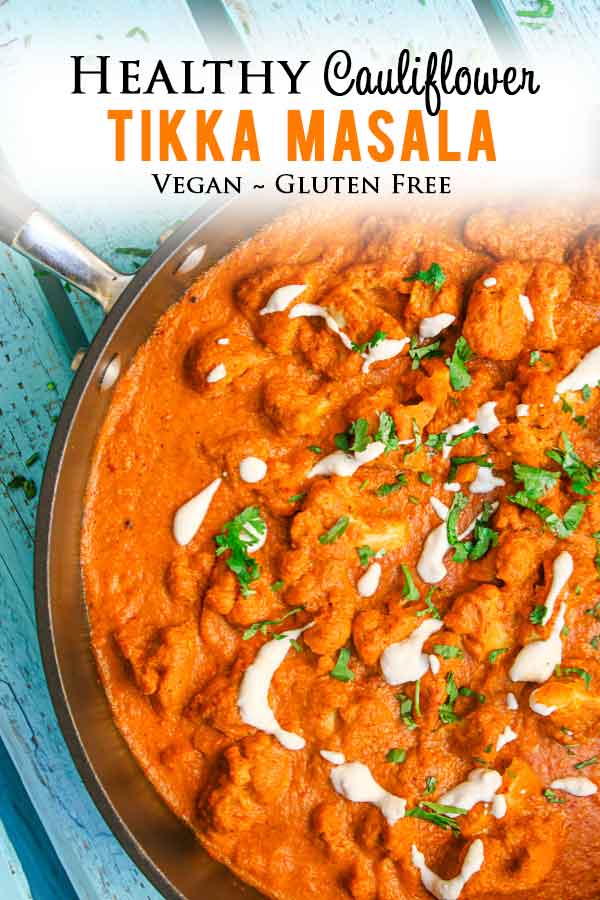 Everyone loves a delicious curry…those bold flavors, the combination of different spices, and that creamy texture. After many trials, today I’m sharing with you my latest creation…Cauliflower Tikka Masala. Some of you may be familiar with this delicious dish.  Well, this is my version of it, MUCH healthier, easy to make, and won’t leave you with a stomach ache.

Most people who say they love Indian Food are typically referring to Punjabi Food from the Northern part of India. If you’re not familiar with what I’m talking about, it’s all the curries and gravies that are full of spice, very bold in flavor, rich, and creamy. I’ve always been a huge fan of Punjabi food, but to be honest, I rarely like to go out for it these days. Now it’s mainly because most restaurant dishes are not vegan, but even before I went vegan, I found it to be too heavy and I’d always end up with a stomach ache.  They have a lot of heavy cream and oil (which to me is unnecessary). So, I needed to recreate another version of this dish at home.  Tikka Masala dishes are particular one of the most popular Indian dishes. You may have seen it as Paneer Tikka Masala at restaurants, but I’ve substituted cauliflower for paneer (cheese). I love sauces or curries where you can combine almost everything in a blender, and then let it thicken on the stove. It’s easy, quick, and there is little prep required. After a few trials I came to the perfect combination of vegetables, coconut milk, and some spices to give me that wonderful bold, flavorful, rich, creamy sauce that we all love so much. Then simply let it thicken up while the cauliflower cooks in the sauce, garnish with some fresh herbs and you will have delicious Cauliflower Tikka Masala, which is also MUCH healthier. And the best part is that this one won’t leave you with a stomach ache! For this recipe, I achieved a nice level of creaminess without having to use any cashews/nuts, but for a slightly creamier dish, you can drizzle on some cashew cream at the end.

For all you Indian Food lovers out there, you MUST try this dish! You will LOVE it! And if you’ve never tried making Indian food at home, this is the perfect dish to start with. It only requires a few spices which should be readily available at most major grocery stores. Try it out and let me know what you think in the comments below! 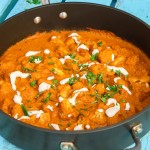 For the Cashew Cream (optional, note that you will only be using a small amount of this cashew cream in the recipe):

To Prepare the Sauce:

To Make the Dish:

The sauce itself is very creamy, and although it does not need the cashew cream, I recommend drizzling some on at the end prior to serving for some added richness.   To Make Cashew Cream - Combine 1/2 cup soaked raw unsalted cashews + 1/4 cup water into a blender (preferably a high-powered blender). Blend on high until completely pureed. You should end up with smooth cashew cream (i.e. no pieces of cashews should remain). You will only be using 1-2 tbsp of the cashew cream in the recipe above. Store any remainder in the fridge or freeze.   For a non-spicy version - Simply omit the red chili powder and green jalapeno.   Coconut Milk - You can use lite coconut cream instead of the full-fat version. I've tried this and it still tastes great, just slightly less creamy.