Spaghetti Squash! One vegetable I’ve always been wanting to try but never have. And all I can say is that I’ve been missing out for the past 30 years! It’s fun to prepare, easy to cook, very healthy, and tastes great in many dishes! And for those of you looking for a non-carb or gluten-free pasta alternative, it’s perfect! You may be asking why I’ve waited so long to give it a try…mainly because I never saw it around much and had only tried it once at a restaurant a few months back. I also thought that you needed to have a special peeler to create the spaghetti-like squash strands, which seemed labor intensive. You can imagine how surprised I was when I walked into Trader Joe’s and they were sampling some cooked spaghetti squash. They were serving it with some meat-based marinara and Parmesan cheese. Excited to try it out, I asked to have a sample with just Parmesan Cheese. The lady preparing the samples said all she did was cook it in the microwave for a few minutes, cut it in half, removed the seeds, and scooped out the spaghetti squash with a spoon! The selling point was that she was doing it right in front of me! That day I found myself walking out of Trader Joe’s with a spaghetti squash in hand. If the cooked spaghetti squash tasted great with just some Parmesan Cheese, I could only imagine what other dishes I could make with it at home! This recipe was adapted from Skinny Taste. When I saw the recipe, mac n cheese came to mind since I’ve made similar recipes before. Since my husband loves mac n cheese, this was a perfect dish to make, substituting the pasta for the spaghetti squash of course. I made a few changes to the original recipe. I added minced garlic, used sharp cheddar cheese, reduced the overall amount of cheese used, eliminated the vegetable broth, and increased the amount of milk.  I found that by doing this, the right consistency and thickness of the sauce prior to baking is easier to achieve. Since there is a lot of spinach in the dish, a lot of water gets released while baking it in the oven. So I would also recommend creating a thick white sauce and baking it for a longer time so that most of the water boils off. For a gluten-free version, I’ve never been a huge fan of using corn starch instead of white flour to make a bechamel white sauce, so I used rice flour instead and couldn’t even tell the difference. Even if there is some liquid remaining, the dish tastes amazing! I was skeptical about adding so much spinach, but it tastes great and adds a perfect green element to the dish. The sweetness of the spaghetti squash combined with the cheesy white sauce and leafy spinach created a flawless flavor that was completely finished by the end of the night. My 3 1/2 year old son loved it and my carb-loving husband was hoping I was not planning on having any leftovers, because he was planning on finishing the entire baked dish (which by the way, he did)! 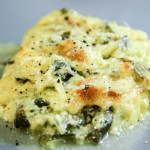 Because of the addition of fresh spinach, this dish could come out quite watery If the white sauce is not thick enough prior to adding the squash and spinach. The water gets released from the spinach and will start to evaporate as the dish bakes in the oven. So by making the white sauce thicker in nature, you are lowering the total amount of liquid that needs to evaporate from the dish while baking. Vegan Cheese: Microwave Method To Cook Spaghetti Squash: Wash the spaghetti squash. Poke holes (using a knife or sharp skewer) all around and place on top of a kitchen towel in the microwave. Microwave for 7 minutes. Rotate the squash 180 degrees so it cooks evenly. Microwave again for another 6 minutes. Adjust microwave times as needed (The exact times may vary depending on how large the squash is and how powerful your microwave is. To check whether the spaghetti squash is cooked through, you should be able to pierce through to the middle fairly easily.). Let the squash cool down. Cut in half lengthwise, remove and discard the seeds, and scoop out and separate the flesh of the spaghetti squash with a spoon until all that remains is the outer shell. You'll notice that the flesh of the squash comes out in strands similar to spaghetti (hence the name "spaghetti squash"). Note that the flesh should scoop out easily with a spoon. If not, then the squash may not be cooked all the way through.