I’ve wanted to make stuffed bell peppers for quite some time now. I love the texture of brown rice, so I knew it was going to be my main ingredient. When I started searching around for different stuffing recipes, I didn’t quite find one that I wanted to use. I decided to just go on my own and throw together some of my favorite ingredients that I thought would go well together as a stuffing and see where it took me! I’ve made this recipe several times now, and love it! I ended up sticking to some pretty basic ingredients for the stuffing…brown rice, roasted tomatoes, garlic, onions, bell peppers, and cheese! The resulting dish was very tasty, satisfying, and healthy. And it was surprisingly easy to make! They taste best with red, yellow, or orange bell peppers because of their sweetness, but I’ve also used green bell peppers and they were still delicious. The great thing about this dish is that you can easily prep everything ahead of time and just stick them in the oven when you are ready to eat! You can stuff the peppers and leave ALL the baking until later. Or I personally like to bake the peppers through with the stuffing and leave the mozzarella cheese step until just prior to eating.

Now that I have the process down, I’m excited to try out new stuffing combinations! What is your favorite stuffing for bell peppers? 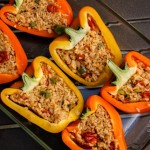 To Make the Stuffing:

To Assemble and Serve: