I FINALLY got around to making one of the things I’ve been wanting to try for a few years now… Coconut Whipped Cream! Don’t ask why it took so long, especially knowing how easy it was to make.  All I can say is that I’ve been missing out on this goodness. My husband and I usually make fresh whip cream with heavy whipping cream and powdered sugar. We use it in desserts and for frosting. Recently I’ve been thinking about a vegan alternative, and coconut whipped cream came into mind. I first tasted it a few years back when my cousins were visiting San Diego and brought a homemade vegan chocolate cake with vegan whipped chocolate frosting made from coconut milk. For those of you who follow my posts, you already know I have an addiction for chocolate + coconut. So you can imagine how much I enjoyed the frosting. Once you see how easy it is to make, you’ll find yourself keeping a few cans of coconut milk in the fridge, so you can whip up some coconut whipping cream anytime! You will definitely want to lick the bowl after making this recipe.

Keep an eye out for upcoming recipes using this delightful coconut whipped cream! 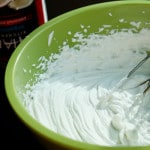 Coconut Milk: - Be sure to use full-fat coconut milk for this recipe, otherwise it will not work. - They also sell coconut cream, which is the thickened part of the coconut milk once it's been refrigerated. This should work as well, but you will need to add more sweetener if using an entire can of coconut cream. (note that I personally have never used a can of coconut cream for this recipe) - I have used Thai Kitchen Coconut Milk for this recipe many times and it's turned out great. Sweetener: - I prefer to use powdered sugar, but you can use any other sweetener, such as maple syrup or agave nectar. They taste good and work well. - Note that if you use liquid sweeteners, your end result may not be as fluffy or stiff because you are adding more liquid to the cream.