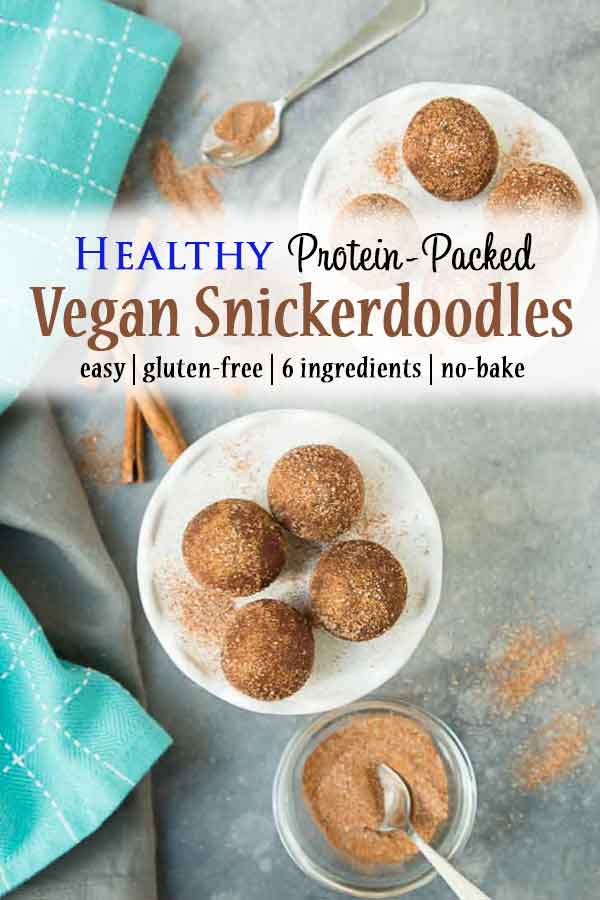 If you’re looking for the easiest quickest vegan snickerdoodle recipe, this is it! Only 6 ingredients, no-bake, takes less than 10 minutes to make, gluten-free, and has that perfect pillowy, chewy, soft texture you crave in traditional snickerdoodles!

This post was sponsored by Bob’s Red Mill, but the opinions and text are fully my own.

Ok…I’m just going to come out and say it. This is the easiest and best snickerdoodle recipe you’ll ever make!

How do I know this? Because I’ve tested, tried, and passed it around to neighbors, friends, and family who can’t get enough of these no-bake cookies! Even a few strangers tried them at my kid’s doctors appointment and gave them two thumbs up.

In general, I’m not a huge cookie person unless I’m enjoying them warm and fresh out of the oven. But when it comes to snickerdoodles, I’ll take them in any form. There’s just something I crave when it comes to that pillowy thick soft cinnamon-sugary goodness.

So, I knew I had to create my own version of a healthy no-bake cookie that resembled a snickerdoodle, and I have to say I nailed it. Especially when you hear people say “mmm…so good!” as they inhale as many of these vegan snickerdoodles as they can.

And the best part? They take less than 10 minutes to make, contain only 6 ingredients, and have that perfect flavor and texture.

What Is A Snickerdoodle?

If you think a snickerdooodle is just a sugar cookie rolled in cinnamon, you have it all wrong.

Although traditionally, they both share the same basic ingredients (butter or oil, sugar, and flour), there’s two key ingredients that are different in snickerdoodles, and that’s cream of tartar and cinnamon.

(Warning…the science geek in me is coming out right now)

Ever wonder why snickerdoodles have that extra soft and pillowy texture? It’s because of the cream of tartar.

When mixed with boiling sugar, cream of tartar acts as an interfering agent and prevents the natural tendency of sugar to bind together. This prevents the sugar crystals from forming while the cookies are baking, hence the soft pillowy texture as opposed to traditional sugar cookies!

How Does This No-Bake Recipe Compare to the Traditional Baked Version?

I know what you’re thinking…if cream of tartar is so important when it comes to snickerdoodles, how do you get the same texture creating a no-bake version of the recipe?

Well, I’m not going to sit here and tell you this no-bake cookie is exactly the same in texture to a baked version. That’d be silly.

But, they taste the same, are super delicious, and honestly quite close in texture! How you ask? With the perfect combination of two different grain-free flours.

Why Is This Snickerdoodle Recipe The Easiest To Make?

If you’re craving that cinnamon-sugary goodness in the form of a cookie, then this vegan snickerdoodle recipe is the best way to make that happen.

It’s as simple as dump in a bowl, mix, roll out into round balls, coat in a dry cinnamon-sugar mixture and that’s it! You can press them down with a fork if you want that cookie shape, but we prefer the fuller round thick bites.

How To Make Any Healthy No Bake Cookie or Bite?

These no-bake snickerdoodles are:

The beauty of no bake cookies is that they can easily be made healthy without sacrificing flavor, texture, or taste. And since they are not physically going into the oven, there’s more wiggle room as to what you can add.

Here are a few base ingredients I like to use when making healthy no bake cookies, bites, or bars.

Flour – Use Almond and/or Coconut Flour

Substitute processed flours for coconut flour and/or almond flour. Both are slightly different depending on what texture you’re trying to achieve.

Coconut flour and almond flour are both gluten-free, grain-free, high in fiber, and less processed than even the healthier whole grains we usually incorporate. They do not need to be fortified.

Since almond flour is simply finely ground almonds, and coconut flour is dried coconut meat, they both taste great raw without that off-putting taste you may get from other grains in their raw form.

When using these grain-free flours in baking, the quality of the product really matters for taste and texture. I’ve tried a few brands out there, and Bob’s Red Mill continues to be at the top of my list!

Bob’s Red Mill makes a superfine almond flour and coconut flour that I love using, especially for no-bake desserts. It gives them that soft consistency and dense, non-crumbly texture.

Oil or Butter – Use Nut or Seed Butter

Substitute oil or butter in no-bake recipes for a nut or seed butter.

I love using almond butter, peanut butter, cashew butter, and sunflower seed butter when it comes to no-bake recipes. But make sure to check the ingredients and avoid brands with added sugar and/or oil.

I enjoy everything in moderation, but when possible, I try to avoid using refined sugar when cooking at home.

My three go-to natural sweeteners are dates, pure maple syrup, and coconut sugar. For vegan no-bake cookies or bites, I typically use pure maple syrup since it’s already in liquid form, mixes in easily, and doesn’t require any blender or food processor.

For these no-bake vegan snickerdoodles, I tested out a few variations of ingredients to achieve that perfect snickerdoodle-like taste and texture I was craving without having to bake them in the oven.

The end result was soft, pillowy, thick, and slightly chewy!

How To Make The Easiest Vegan Snickerdoodles – Step by Step

Mix together the raw sugar and cinnamon. Set aside. (see recipe notes for a refined-sugar-free version)

In a medium bowl, combine the maple syrup and almond butter with a fork or small whisk.

In another small bowl, mix the almond flour, coconut flour, and cinnamon. Add it to the almond butter-maple syrup mixture.

Combine using a fork or your hands.

Let the mixture sit for a few minutes.

Using a tablespoon, scoop out the dough-like mixture and roll into balls.

Immediately roll in the sugar-cinnamon mixture. Make sure that you get even amounts of the cinnamon and sugar to stick to the outside.

Enjoy the bites immediately, flatten with a fork into cookie shapes, or store in the fridge and enjoy throughout the week!

Whenever I make a batch, they get devoured the same day without even making it into the fridge. So be sure to make double the batch!

This vegan snickerdoodles recipe is very forgiving, but just in case, here are a few tips to watch out for:

If you’re looking for another great no-bake recipe, check out my Protein-Packed Chocolate Cookie Dough Bites!

Sugar – You can omit the coating, but I highly recommend it. I also recommend rolling these bites in raw sugar  insted of coconut sugar for that true snickerdoodle taste.  Lastly, if you want to take these cookies up a notch,  add 1/2-1 tbsp raw sugar into the dry flour mixture bowl before making the mixture.   Almond Flour – If you make your own almond flour or use almond meal, the texture may not be the same since I recommend using superfine almond flour.   Almond Butter –   Flour Substitutions –   Refined-Sugar Free – To keep this recipe completely refined-sugar-free, use coconut sugar for the sugar-cinnamon coating. But note that the taste will vary slightly when compared to traditional snickerdoodle cookies.   Nutrition Information – Above does not contain the rolled cinnamon-sugar coating.