This was probably one of the more difficult recipes for me to develop, but not because I couldn’t figure out the flavors and consistency, but because I couldn’t get myself to STOP eating the hot roasted cauliflower coming out of the oven every time I tried to make this soup! Cauliflower is one of those vegetables I use frequently in my cooking, such as here, because it provides a nice texture, but it was never a veggie I truly enjoyed. However, with this dish, I discovered a whole new element of cauliflower, oven-roasted, which is absolutely amazing.

As I mentioned, when I first developed this recipe I couldn’t stop eating the roasted cauliflower hot straight out of the oven.  Before I realized it, I had finished over half, straight from the baking sheet! I eventually finished this delicious recipe for Roasted Cauliflower & Mushroom Soup! Although I ended up going in a completely different direction when developing this recipe in terms of ingredients and cooking method, the initial inspiration for combining both mushroom & cauliflower into a creamy soup came from Kalyn’s Kitchen‘s Mushroom & Cauliflower Pressure Cooker Soup. Overall, this soup is very easy to make and full of flavor. My favorite part about this soup is the ‘chunky’ texture. Instead of completely pureeing this soup, I pulsed it a few times to keep some of the veggies intact so that it’s not only nice and thick, but you can also taste the roasted cauliflower and mushroom pieces in the soup.  I served this soup for dinner with a side of toasted french bread, and even my kids loved it. I was fortunate to have some leftovers for lunch the next day.  In fact, after the soup had some time to sit, even more of the flavors were brought out. The flavor of the mushrooms also really comes through in this soup, so if you’re a mushroom lover, this recipe is definitely for you! You can probably guess what I will be experimenting more with in this next month… yep, something involving oven-roasted cauliflower!

I’m also excited for the next few weeks because I have some exciting giveaways planned for all of you!

UPDATE: I recently modified this recipe to Veganize it, and it turned out delicious! I’ve added the modifications below for a vegan-option. 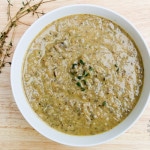 Vegetable Broth - I use Imagine Brand Low-Sodium Organic Vegetable Broth in most of my recipes and soups.   Non-Dairy Milk - If you prefer a creamy soup, use a neutral flavor unsweetened non-dairy milk such as cashew milk or almond milk. You can also opt to omit the non-dairy milk completely and the soup will still taste great, just thicker (I've tried both variations).   Vegan Parmesan - I prefer using Follow Your Heart brand or Violife brand.