My husband and I had gone to a Mexican restaurant in Las Vegas and had Poblano Cream Sauce Enchiladas with mushrooms. They were absolutely amazing and I knew I had to recreate them at home. I originally searched through a bunch of recipes online and tried making a version of the dish by combining a few recipes, but the sauce did not turn out quite as creamy in taste and the flavor of the poblano chiles did not come across correctly. A few months later, a friend of mine mentioned she had made these Poblano Cream Sauce Cauliflower enchiladas for a dinner party. She passed along the recipe and I decided to give it a try with some modifications.

This recipe was inspired by Sylvia from Feasting at Home. I adapted her recipe for the Poblano Cream Sauce, slightly reducing the amount of vegetable broth. I also decided to use some mushrooms, onions, and garlic in place of the cauliflower for the filling. We love mushrooms, so that’s my natural go-to when thinking of a vegetable, but in all honesty, you could probably fill these enchiladas with any other medley of roasted vegetables, or even something as simple as black beans and cheese. I also decided to use some greek yogurt instead of sour cream a few times and the resulting sauce was still delicious. It was very easy and quick to roast the poblano chiles and prepare all the other components that go into this dish. Immediately after tasting the sauce and filling, I knew this recipe was a winner and that I was done searching for that perfect Poblano Cream Sauce Enchilada recipe!  The flavor of the roasted poblano chiles came through perfectly, and the filling ingredients complemented the sauce very well! I made these enchiladas with a side of Cilantro Rice and black beans.

If you have yet to make enchiladas in your own home or are looking for another variation of your traditional enchiladas, this recipe is impeccable and very easy to make! I would also love to hear what filling ingredients you come up with! Enjoy! 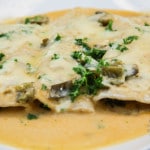 To Roast and Prepare the Poblano Chiles:

To Prepare the Vegetables:

To Prepare the Poblano Cream Sauce:

To Make the Filling:

To Assemble the Enchiladas: