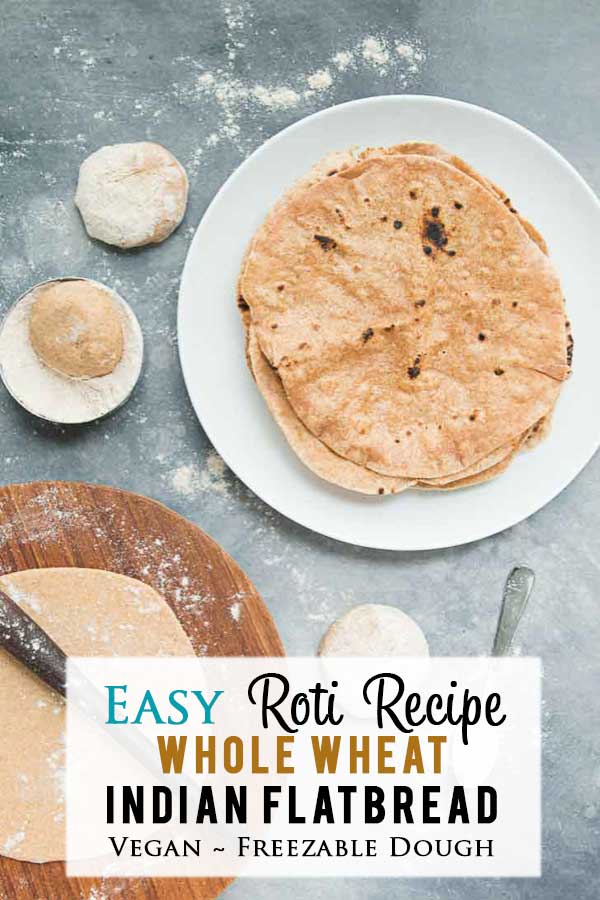 One of the best parts about Indian cuisine is the fresh homemade flatbread! So whether you’re an expert or just getting started, this easy Roti Recipe has great tips and tricks on how to save time and make the perfect roti at home!

This post was sponsored by Bob’s Red Mill, but the opinions and text are fully my own.

When you think of Indian food, the first thing that probably comes to mind is all the aromatic flavorful curries and daals!

But what ends up getting overlooked, and in fact is one of my favorite parts about the Indian cuisine, are all the different fresh homemade flatbreads to accompany these rich curries, vegetable sides, and lentils!

There are many different types of Indian flatbreads. Two of the more popular varieties are Naan and Roti (or chapati)!

What Is The Difference Between Naan & Roti?

Naan is a flatbread you’ll typically find being served at restaurants and is less common in homes. Naan is:

Although you can find many store-bought pre-packaged vegan Naans, fresh Naan served at restaurants is not typically vegan and frequently contains dairy or eggs.

Roti, or chapati, is the most common type of Indian flatbread, especially in the Northern parts of India. It’s typically:

There are many different types of roti depending on how it’s cooked.

My favorite type of roti recipe is the one I grew up eating…phulka roti!

Phulka roti is cooked one side on a flat griddle, and the other side on a hot open flame. Due to the high heat, steam accumulates inside the roti and the bread puffs up like a ball (phulka).

Is Roti Vegan and Gluten-Free?

Roti consists primarily of whole wheat flour and water and is therefore vegan. I add a tiny bit of oil to the mix, but that’s it! Traditional roti is not gluten-free, but I’m working on perfecting one using rice flour or amaranth flour.

Growing up, I used to eat fresh homemade phulka roti (or chapati) almost every day. My mom was always so quick at making the dough, rolling them into perfect round shapes, and cooking them stove-top.

Although I’d help her out quite often, I never cared to make the dough and would only occasionally try my hand at rolling them. I mainly helped with the cooking and loved watching them fluff up straight on the stove-top fire.

Of course, this was all in hopes that I’d be able to sneak a few fresh roti before dinner. There’s really nothing like the taste of freshly made warm roti.

Bringing Culture To My Kids Through Indian Cuisine

Fast forward 20 years, and I now have two kids of my own. I’ve always made it a point to introduce them to a variety of different cuisines at a very early age, and of course, that includes the Indian (mainly Gujrati) cuisine.

I generally love all sorts of foods. But as an Indian, born and raised in the US, it was important to me that my kids also learned to love Gujrati food and Indian cuisine as we did growing up.

How’d I go about doing this? I try and make Indian food, specifically Gujrati food, 2-3 times a week for dinner. Not only is most Gujrati food already vegan, but it’s also healthy.

I’ve always found cooking Indian curries, vegetables, daals, and rice to be fairly easy. I also have a few tips and tricks up my sleeve on how to make cooking Indian food EASY for all of you, which I’m hoping to share in another post.

But the one thing I’ve always hesitated/felt lazy about was making homemade fresh roti for dinner. Having to use my hands to make the dough every day, getting flour everywhere, figuring out how to roll without sticky dough…it all felt like a pain to do on a regular basis.

…that is…until about 2 years ago.

What changed? A little practice, but mainly a great easy roti recipe to streamline the process!

How Do You Eat Roti Flat Bread?

There are many ways to eat roti. Since they are thin and light, they are traditionally served alongside an Indian curry, vegetable side dish, or daal.

You can also roll the roti extra thin (roomali roti) and use it to make a wrap. My favorite stuffing is curried pan-fried tofu and peppers.

How To Make This Easy Roti Recipe – Step by Step

Which Flour Is Ideal for Making Roti?

There are many whole wheat flours available at Indian grocery stores. But I personally love and trust the quality of Bob’s Red Mill 100% Stone Ground Organic Whole Wheat Flour.

Even my mom, who has been making roti for ages and has used many different brands of whole wheat flours (including those from Indian grocery stores), completely switched over to using Bob’s Red Mill years ago because of the quality of their products.

How To Make Roti Dough

In order to guarantee soft roti, the dough should be soft, pliable, and not sticky.

To make roti dough, combine whole wheat flour, water, and a little oil. You can use your hands or a stand mixer (see below).

Once fully combined, knead for at least 5 minutes (or until dough is soft enough that it leaves an impression when pressed).

Then cover and set aside with a damp napkin or cloth for 10-15 minutes to proof. The longer you let it set, the softer the roti.

How To Roll Roti

Divide the dough into small palm sized portions. Be sure not to make them too large otherwise it’ll be difficult to roll out the roti.

Use a wooden or marble rolling surface.

How To Cook Roti

Remove excess flour and place the rolled roti flat on a medium-heated flat pan. Cook for about 10-20 seconds until small bumps start to form.

Flip and cook on the other side for about a minute until small brown spots start to form on the roti.

Now remove the pan from the heat, and flip the roti directly onto the open flame using tongs.

Allow the roti to fluff up.

Remove the roti straight into a container, apply some vegan butter to avoid drying, and let it cool. You can continue to stack the roti until they are all done.

How To Store Roti

Roti tends to get chewy and dry when left open and exposed. So be sure to spread a layer of vegan butter on the roti immediately after it’s done being cooked and keep them in a container.

Once all the roti are done and stacked together, close the lid 3/4-ths of the way, until ready to serve.

To freeze extra prepared roti, place in a sealed freezer bag with parchment paper in between separating each one. Once ready to serve, defrost and cook on low heat on a flat griddle on both sides until soft. Spread some vegan butter and serve.

How To Make This Roti Recipe Easier

My biggest issue with making fresh roti each day is the time, effort, and mess it takes to make the actual dough. I know my mom was always very quick with this step, and perhaps I’d get used to it too. But for now, it keeps me from making fresh roti.

The solution? Knead the dough and make large batches using a stand mixer!

Then when you’re ready to use the dough,

An added BONUS! After going through the process of freezing and defrosting, the dough is much easier to work with and roll!

To save time, I always make large batches of freezable dough in the stand mixer!

The key to making fresh roti is still all about practice! But the best part is that it doesn’t have to be perfect. Even though the steps are easy, I’ve tried to be as detailed and thorough as possible in the recipe below (hence the length of the recipe). If you follow this recipe and practice rolling, the roti will fluff up and taste great!

For More Vegan Indian Recipes, Check These Out: 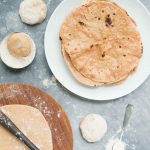 This easy Roti Recipe has great tips and tricks on how to save time and make the perfect whole wheat Indian Flatbread at home! The key is to practice a few times until you get the hang of it!

The key to this recipe is PRACTICE! Most likely you won’t get it right the first time, but after the 10th roti, you’ll get the hang of it!   Prep-Ahead – Make large batches of dough in the Stand Mixer and freeze to save time! This is the only way I like to make fresh roti.   Whole Wheat Flour – I have always used Bob’s Red Mill 100% Organic Stone Ground Whole Wheat Flour for this roti recipe. All brands of whole wheat flour vary slightly, so if you use a different brand of flour, you may need to adjust the amount of water needed for the dough. Start off with less water, and slowly add more as needed.   Cooking Roti Without Open Flame – If you don’t have an open flame, cook the roti in a flat pan on both sides for about a minute until brown spots start to form. Flip once more, and using a small flat spatula, gently press around the edges of the roti to try and get it to fluff up slightly.   TROUBLESHOOTING & TIPS –    Making Roti Dough –   Rolling Roti –   Cooking Roti –   Making Dough Ahead-Of-Time –    Defrosting Prepared Roti Dough