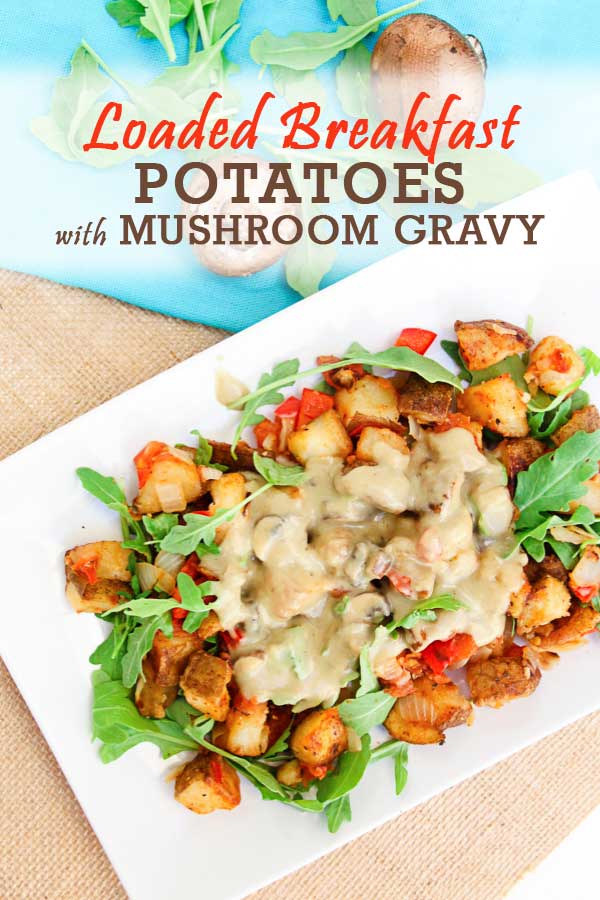 This delicious and creative Loaded Potatoes Breakfast Bowl with Mushroom Gravy is perfect for breakfast, lunch, AND dinner! It’s packed with delicious flavors from the crispy loaded potato hash and creamy mushroom gravy. It’s the perfect way to start your day!

Meals in a bowl. I love them. Anyone else with me? It’s the first thing that comes to mind, especially during lunch, when I’m craving many different flavors and textures at once.

Conceptually, it’s also the easiest thing to whip together and a great way to enjoy a well-balanced, complete meal. This desire of mine for one-bowl meals is more of a recent thing, and I’ve been stuck on a few staple meals that have been way over-used.

Well, thank goodness for Jackie and her new Vegan Bowl Attack cookbook for coming up with so many different and awesome combinations that are not only delicious, but also fun to eat, fun to make, completely satisfying, creative, and healthy!

Choosing what to make first from her cookbook was sooo hard. There were just so many mouthwatering recipes I instantly wanted to try, but her Loaded Potatoes Breakfast Bowl had me at “crispy potato hash” and “heavenly mushroom gravy”.

Here’s to enjoying breakfast for lunch AND dinner…because that’s exactly what happened when I tried out this recipe of hers! I’m excited to be able to share this recipe from Jackie’s new cookbook, Vegan Bowl Attack! 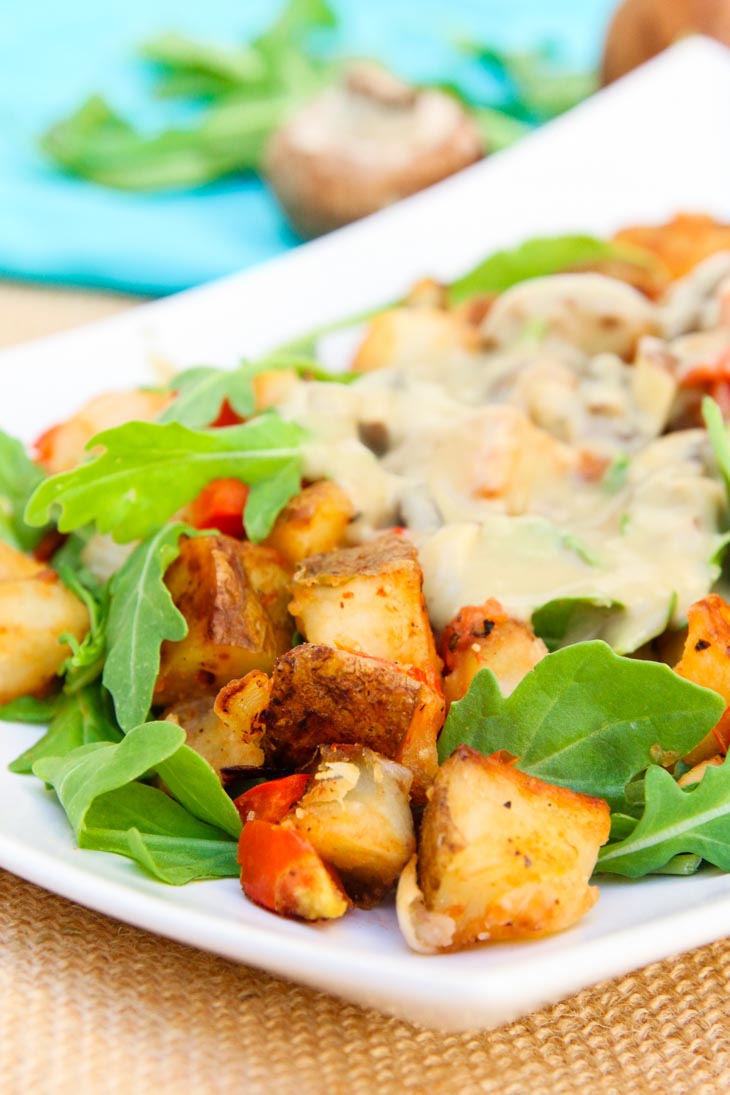 I had the pleasure of meeting Jackie for the first time at a SoCal vegan blogger meetup a while back. If you know anything about Jackie, her popular blog Vegan Yack Attack, and how talented she is in the kitchen, then you know that any cookbook created by her is going to be nothing short of amazing.

She’s witty, fun, creative, and very talented. When I first heard the title of her book, I knew it was going to be life-changing, especially with my recent desire to eat my meals bowl-style. Her stellar photography alone had me excited to get my hands on it! 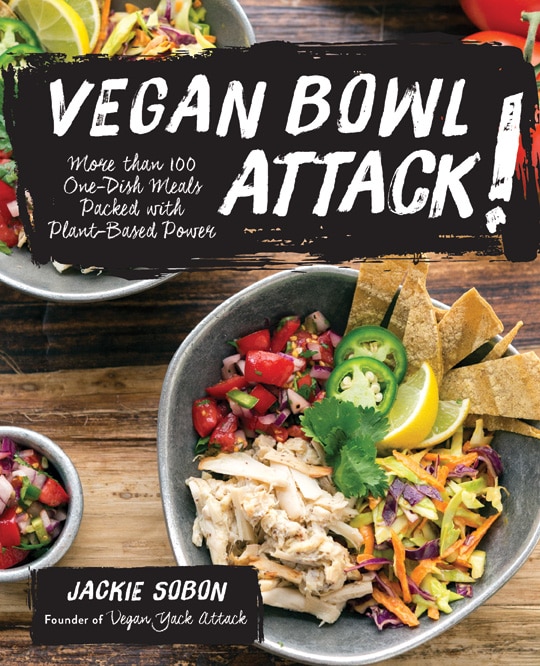 She even has an entire section on Bowl Essentials that includes multipurpose sauces, spreads, dips, and drizzles you can use. I also loved reading her introduction (which doesn’t happen for every cookbook I pick up)…it was simple, clear, and a perfect read to get to know what her cookbook is all about.

There is also a section on Bowl Basics and a walk-through on creating your own bowl, which I found really helpful.

Vegan Bowl Attack contains more than 100 one-dish plant-based meals and I can’t wait to continue my way through it! Jackie has really covered it all with her new cookbook…trust me when I say that this is one book you’ll want to permanently keep on your kitchen counter. 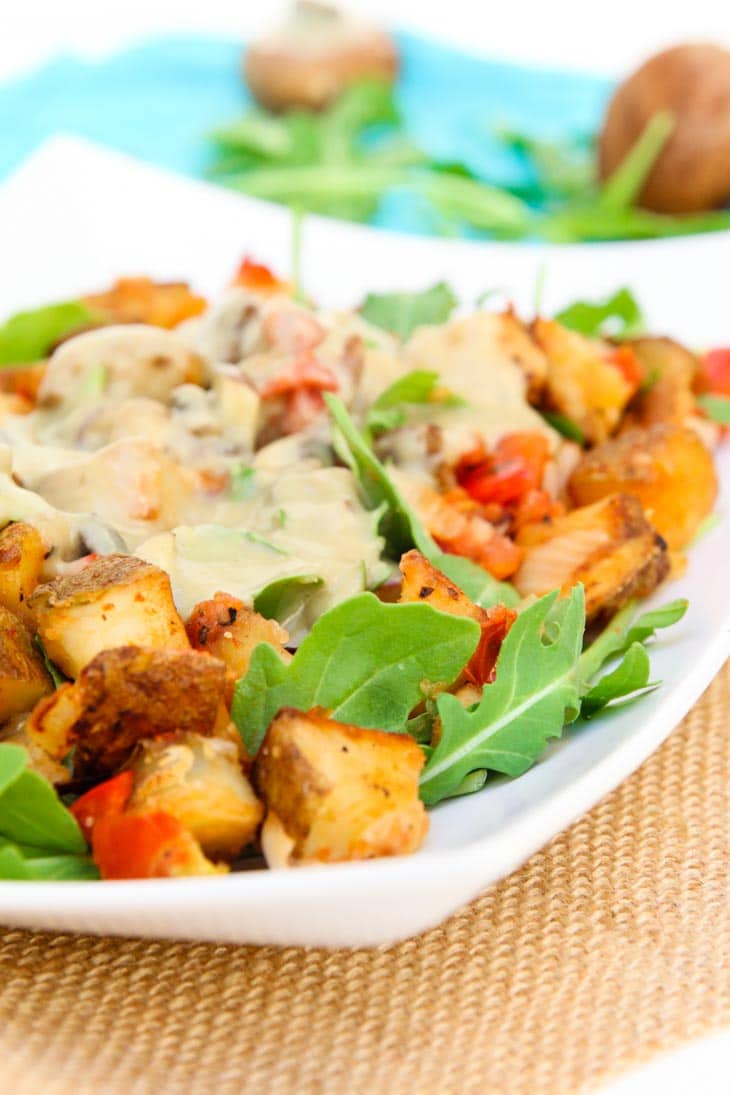 This loaded potatoes breakfast bowl was off the charts delicious. I mean it’s the kind of meal anyone would enjoy whether it was for breakfast, lunch or dinner.

It’s the perfect balance of flavors and textures from the crispy potato hash to the creamy and flavor-packed vegan mushroom sauce.

The potato hash is just incredible and can easily be adapted into many different dishes from side dishes to appetizers to salads served with your favorite sauce or gravy. Better yet it’s made with simple ingredients you probably already have in your kitchen.

Here’s what you need to make it; 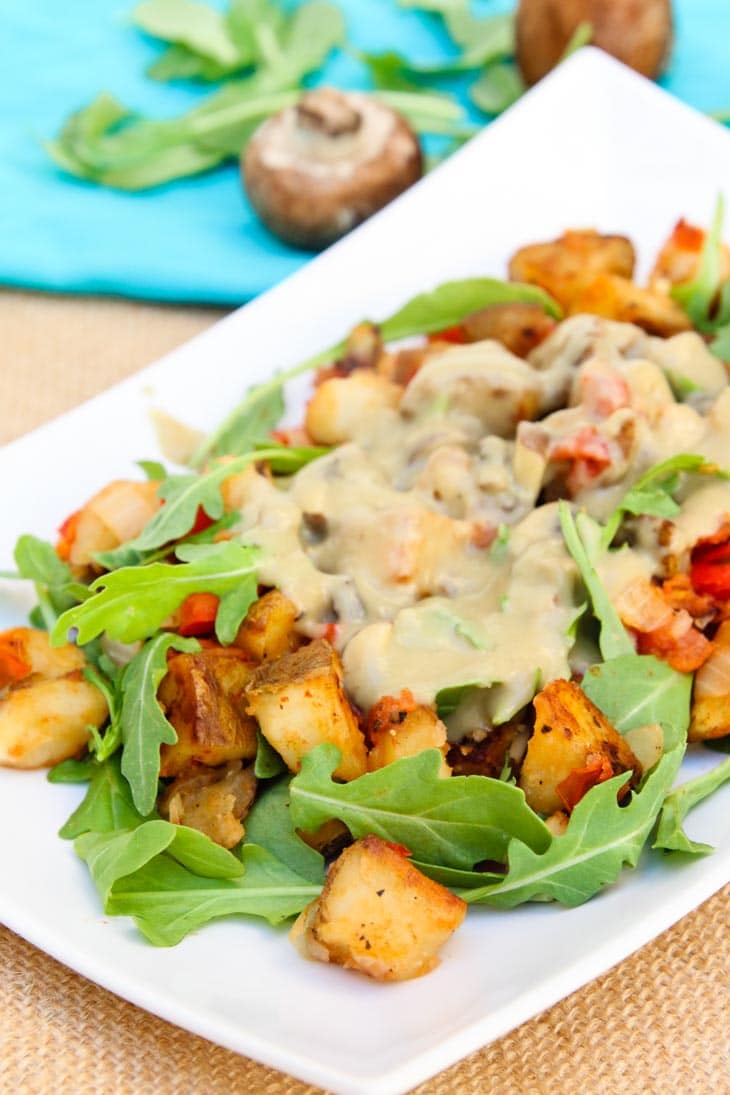 If you try this Loaded Potatoes Breakfast Bowl or get the Vegan Bowl Attack Book be sure to let me know how you go on in the comments below. You can also tag me on Facebook or Instagram if you try it out, with both @vegetariangastronomy, #vegetariangastronomy. I’ve loved seeing and sharing all your re-makes! 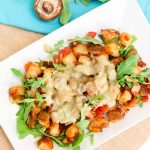 For the potato hash:

For the mushroom gravy:

To make the potato hash:

To make the mushroom gravy:

Store any leftover mushroom gravy in an air-tight container and enjoy over toast.