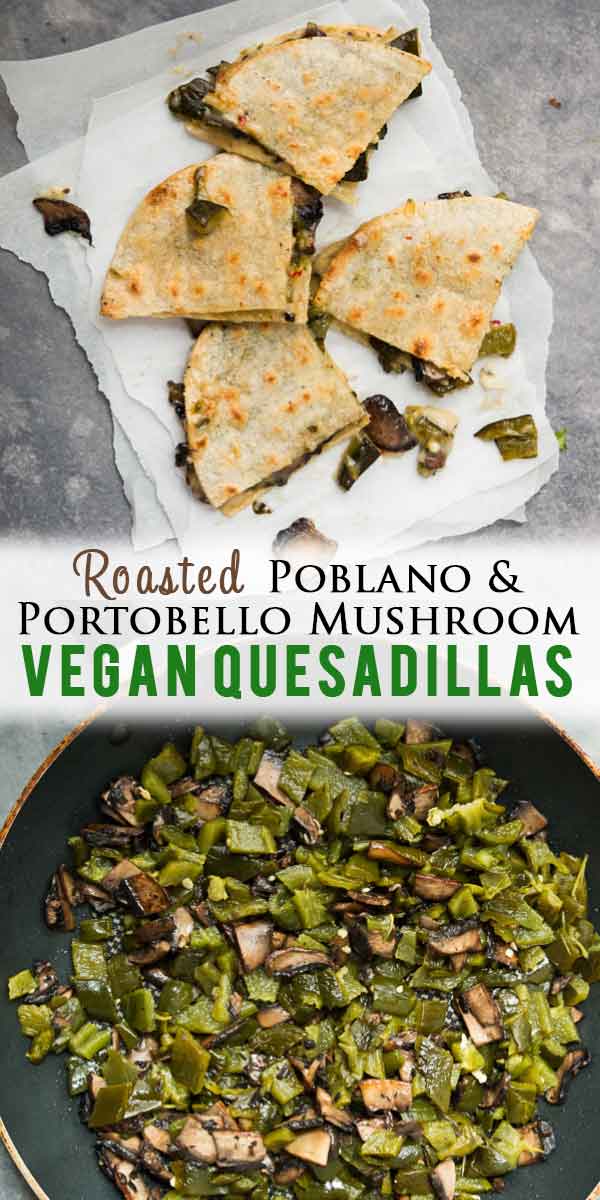 Tired of your typical plain quesadillas? Try this fun twist with roasted poblano peppers and portobello mushrooms! A simple recipe that makes this vegan quesadilla a delicious dinner option!

If you’ve ever stepped foot in a kitchen, you probably know how to make a quesadilla.

Chances are, it’s one of the first things you learned how to make as a kid because it’s simple. Grill up some tortilla, stuff it with your favorite cheese, and fold it over until the cheese melts!

Yep…that good old fashion cheese quesadilla. It was definitely one of my go-to meals in college and never failed to satisfy.

To be honest, I never understood people who went to Mexican Restaurants and ordered plain cheese quesadillas…no special sauce, just cheese and tortillas!

My husband was one of them…but who wants to pay money for something that’s 2 ingredients and can easily be made at home??

But then, I came across the combination of mushrooms and poblanos in quesadillas. ONLY THEN…would you have caught me me ordering a quesadilla at a Mexican restaurant.

There’s something about the earthy combination of roasted poblano peppers and mushrooms that has me craving them in quesadillas! And now I can easily make a vegan version at home using this recipe!

What are Poblano Peppers?

Poblano peppers have thick skin and a wide base, making them perfect to stuff and roast since they’ll typically hold their shape. You probably know these peppers best from chile rellenos.

When dried (and sometimes smoked), these peppers are known as ancho chili which is used in many traditional Mexican dishes.

Poblano peppers are perfect for roasting since they have a tough outer skin.

Roasting brings out the fruitier flavors of the peppers and makes it easy to remove the thin outer layer of skin, which can sometimes be difficult to digest.

How To Easily Roast Poblano Peppers?

You don’t need an outdoor grill or any fancy tools to roast poblano peppers.

Your oven will work perfectly. In fact, I love using my small toaster oven to roast 3-5 poblano peppers at a time! Toaster ovens are quick to heat up, and use a lot less energy.

Once they’re done roasting, I like to place them in a bowl and cover with a towel until they’re cool enough to handle. Then under running water, gently peel and wash off the top thin layer of the skin, the seeds, and stem!

Now you can slice, dice, or use them as is in a variety of different dishes!

How To Use Roasted Poblano Peppers

Once your peppers are roasted you can use them a few different ways:

Lastly, my favorite way to use them…in these Roasted Poblano & Mushroom Vegan Quesadillas!

If you need a new vegan quesadilla recipe, love mushrooms and peppers, or need a quick and easy delicious Mexican dish, try out this recipe!

Before I dive into the recipe, let’s talk a little about my favorite brands of vegan cheese to use for this vegan quesadilla recipe.

Which Vegan Cheese Should I Use For Quesadillas?

I’ve tried almost all vegan cheese brands out there and can happily say that there are some awesome vegan store-bought cheeses out there (and also some not-so-great ones).

Since this is a vegan quesadilla recipe, let’s talk about my favorite brands of cheese to use in quesadillas:

For this particular recipe, I prefer the flavor of pepper jack cheese with the roasted poblano peppers & mushrooms, but any other will taste great as well!

I also love Miyoko vegan cheeses, and I had a little sneak peek this past March at something they’re working on…nut-free vegan pepper jack cheese shreds! What they already had formulated tasted great, so hoping to see them out on the market sometime soon!

Add a little cheese on BOTH sides of the filling so that the cheese fully melts through and holds the quesadilla together! That way you can stuff the quesadilla with the mixture without worrying about it falling apart.

Now that I have you hooked on these vegan quesadillas, let’s dive into the recipe!

How To Make Mushroom Vegan Quesadillas – Step by Step

These vegan quesadillas are one step up when it comes to flavor, but can easily be made in under 30 minutes.

Roast the poblano peppers in the oven. Rub some oil and bake them in the oven at 400 until their skin starts to blister and char.

Make the poblano mushroom mixture. Add the diced poblano peppers to the sauteed mushrooms, season with salt to taste, and cook for 1-2 minutes on medium heat to combine.

Make the vegan quesadilla. Grill your favorite tortilla on a pan with some vegan butter, add the filling, top with vegan pepper jack cheese, fold in half, and cook until the tortilla is crispy and vegan cheese has melted through. Slice and serve with your favorite hot sauce!

What is your favorite Quesadilla combination?

For all you TACO lovers out there, check out my roundup of 25 Mouthwatering Vegan Taco Recipes! 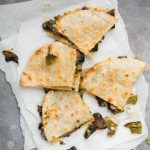 To Roast and Prepare the Poblano Chiles:

To Prepare the Mushrooms:

To Prepare the Quesadillas:

Make-Ahead Tip – Prepare the mushroom/poblano mixture ahead of time so all you need to do is assemble and grill the quesadillas. Alternatively, roast the poblano peppers to save oven time.   Tortilla – Use your favorite tortillas for this recipe. I prefer either corn tortilla (gluten-free option) or flour tortillas.   Vegan Cheese –